The blockchain sector is growing fast, according to the recently published forecasts of the manager of the Bny Mellon Digital Asset Fund, the business is expected to reach 3100 billion by 2030. As fragile as these forecasts are, they are an indication and an alert to those who are working in an industry that is set to grow exponentially. No one should think they are too far ahead because competition is growing and distances can always be bridged with the right resources.

It is therefore in this context that the Cryptoboard of Quadrans Foundation is an extremely important body because it is intended to select and involve the best minds and the most advanced international research groups in the field of blockchain.

The Chairman of the Board is Massimiliano Sala, professor of algebra at the University of Trento, Director of the cryptographic laboratory (CryptoLabTN) and Director of the Association of Italian cryptographers De Componendis Cifris. He authoritatively clarifies his role and the role of the CryptoBoard of the Foundation: “The main task of the Cryptoboard is to evaluate scientific projects designed to improve Quadrans blockchain and more generally to improve the blockchain technology. Our goal is to advance Quadrans as a flexible blockchain that can make the most of the potential of this new technology and at the same time maintaining high levels of security”.

Based on our objectives, the Board is recruiting the best experts from all over the world. Federico Pintore, mathematician and cryptographer, currently working at the Mathematical Institute of the University of Oxford, has been appointed as Vice-President of the Cryptoboard. One of the focuses of his research path is cryptographic algorithms related to elliptical curves and post-quantum cryptography, all significant elements for the development of Quadrans blockchain. “In a historical moment where applies the motto "information is money",” - explains Pintore - “the protection of the users data is fundamental. This applies even more to blockchain applications, which make sharing and storing data their strength and appeal. However, the cryptography currently used by most blockchains is at great risk: a malicious user with a (hypothetical) quantum computer might be able to neutralize the security provided by the cryptographic schemes. This threat has been seriously considered by experts and government agencies for some years now. The development of post-quantum cryptographic schemes (i.e. safe even in the presence of a quantum attacker) has seen a recent surge, and soon the first standards will be released. The integration of these new systems in applicative contexts is one of the next major challenges of cryptography, in which blockchain technology will also be involved. For a blockchain platform, taking steps towards this direction might represent a significant technological and competitive advantage over the competition.”

The Cryptoboard is working with a team that is already well ahead of its time and is willing to progress further by opening up to collaborations with the best professionals and research groups in the world.

Sala adds: “I have sought for balance between university researchers, community leaders and experienced developers, as each brings its own scientific, organizational and professional skills”.

Hence, in addition to Federico Pintore, the involvement of Pascal Lafourcade, Doctor of Computer Science and Maître de Conférences (associate professor) at the University Clermont Auvergne, which boasts over 90 international publications and several books, one of which is on blockchain and another on PKI (public key infrastructure): “My contribution to Quadrans Foundation as a member of the Cryptoboard is to offer my experience and advice on the security and correctness of cryptographic protocols to strengthen Quadrans ability to deliver efficient and secure smart contract executions”.

Lafourcade's words also highlight how stimulating the work is: “Bitcoin was invented in 2009 by Satoshi Nakamoto. The first decentralised cryptocurrency represents a revolution, not an evolution. The revolution starts with the concept of blockchain, which offers trust without a central authority and allows the development of “smart contracts” execution, which must be transparent.
I was immediately fascinated by this revolution and for some time I decided to direct my research work in the formal verification of cryptographic protocols. In this sense, Quadrans Foundation has stepped into this revolution by funding blockchain-related researches and providing a blockchain platform for secure smart contracts execution”.

“Quadrans blockchain is very flexible” - stresses Massimiliano Sala - “and can be used for multiple projects”.
“The three main applications I see at the moment are:

the tracking of the steps within any processes such as supply chains, etc.;

total traceability from producer to consumer.

I certainly expect proposals in the agri-food, medical/pharmaceutical, and public administration sectors.”

According to the plans, the researchers involved in the development of Quadrans will release a White Paper and a Yellow Paper with all the technical specifications to enable the use the potential Quadrans blockchain. This includes post-quantum resistance, achievement of balance between energy consumption and ensured security and the fair distribution of incentives to Quadrans users to increase the proliferation. “As mentioned, we expect a complex work ahead and the involvement of experts like Jason Teutsch, founder of Truebit, further underlines the quality and commitment of the Foundation”.

“However, to answer some questions concerning Quadrans” - continues Professor Sala - “unlike Ethereum, in Quadrans there are two elements native to the system: the Coin and the Token.
For the use of the infrastructure users only need Coins, which are continuously generated in ever-increasing quantities, and therefore their value is linked solely to computational resources (to give an idea, the same as using a commercial Cloud service). This discourages speculation. As for Tokens, they have been generated as a fixed amount and are linked to the intrinsic value of the Quadrans platform.
Their ownership entitles users to perform specific actions, such as doing mining or uploading new smart contracts, as well as taking part in the protocol’s validation system.
In addition, part of the Coins generated are distributed between Token Holders.
Consequently, the intrinsic value of the Quadrans infrastructure is linked to its increasing adoption. This does not affect in any way the use of the platform (which is regulated exclusively by Coins)”.

These are only a few details on the technology, however they provide an insight on the challenge of the project and explain why Quadrans Foundation is attracting the best specialists in the world.

“One last thing" - adds Massimiliano Sala, on his way to the conclusion of his speech - “It is important that the Cryptoboard acts independently from to the developers and users of the Quadrans platform, as its activity shall be guided solely by the scientific and technical value of the proposals examined”.

The Cryptoboard shall not go into implementation or economic details, but only suggests strategic directions and/or opinions to the Board of the Foundation, which is the only body that can make executive decisions. 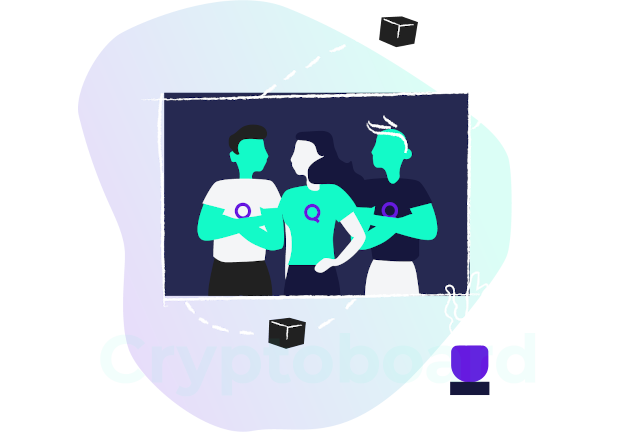